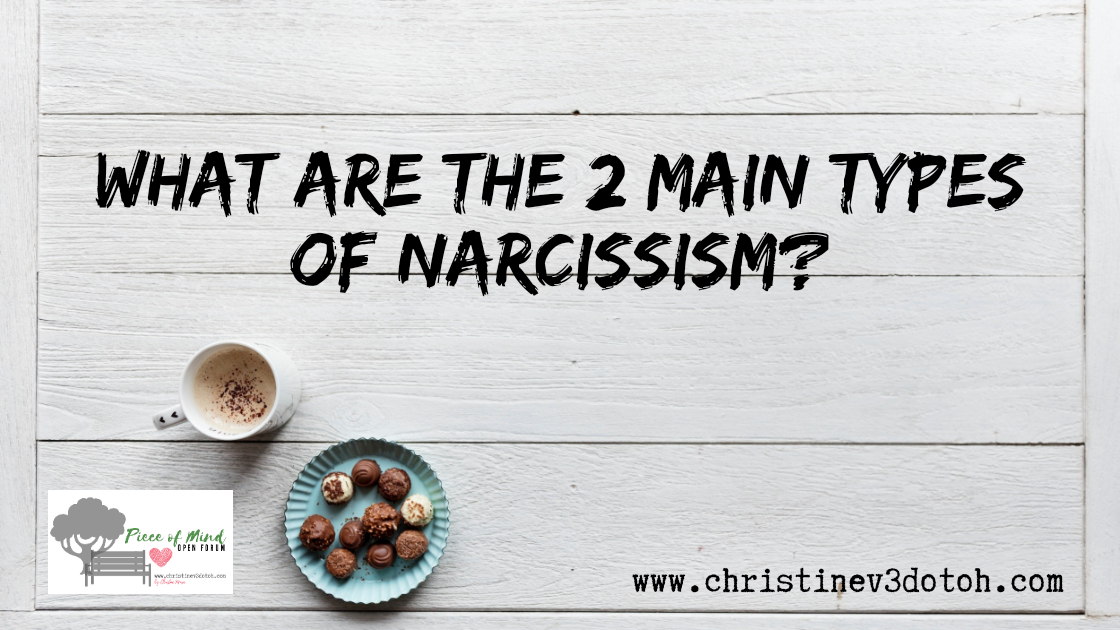 Did you know that there are 2 main types of narcissism that exist?

If you’re thinking that the term “Narcissistic” is only applicable to those who have strong and bossy personalities, similar to the ones commonly portrayed in the movies, it means that you’re only familiar with the “Traditional Narcissist”.

Trust me, there’s more to it than just that.

And you’d be surprised.

Once you have identified someone as narcissistic, it is not enough to confirm that he/she is narcissistic based on the behavior.

You also need to know what type of a narcissist you’re dealing with in order for you to determine how to best handle him/her.

Review of My Previous Article: What Is Narcissistic Personality Disorder?

In my previous article, I have introduced the topic about Narcissistic Personality Disorder by simply giving the definition.

I also gave you some terminologies which you would often encounter when you deal with the topics about narcissism.

I hope that you also did some advance reading to get to know more about the other terms which I shared in that article because we’re going to start having deeper discussions around this subject, so it would really help if you’re already familiar with those terminologies.

And now, our topic is about the 2 Main Types of Narcissism and their differences.

You might be wondering, “What’s the importance of knowing the different types of narcissism if the only thing we should be doing is staying away from all the narcissists once we’ve identified them as such?”

Well, there’s a point to that question.

However, as much as I would like to say that things go as easy as that when you get involved with someone who has NPD, I couldn’t say so.

That is because it could be difficult to spot a narcissist if you don’t have any idea at all.

And this is also because the narcissism that we’re discussing here is something more complicated than simple vanity which we all know about.

Why Is It A Must To Have Good Narcissism-Spotting Skills?

No matter how smart and successful you think you are, these narcissistic individuals still have their ways to manipulate, deceive, and control their victims in a manner unimaginable most of the time.

This is also the same reason as to why a lot of Narcissistic Abuse victims end up losing their identity and confidence in themselves because they couldn’t believe that they have been fooled by a “nobody”.

We all need good narcissism-spotting skills in order to save ourselves from getting into a lot of problematic situations.

And knowing the different types of narcissistic people would help us have an idea on the things and behaviors to look out for in a person so we could quickly runaway or stay away from them once we have seen some red flags or alarming signs earlier on.

Early identification is very important because it saves the victims from investing emotionally to the narcissist which prevents them (the victims) from getting lulled into the dark world of these kinds of people.

Once the victim has bitten the bait, it could be extremely hard to withdraw because getting involved with a narcissist could be the most mind-bugling experience that you would ever have in your life.

No wonder why a lot of victims still stay, regardless of how much abused and tortured they have been.

To be frank, these are the things I wish I’d known back in the days because this amount of knowledge would have saved me from a lot of pain and devastation.

Had I been made aware of this personality disorder earlier on, I would have learned how to put up strong boundaries between myself and my potential abuser.

Type #1: The Overt Narcissist

This first type of narcissist that I’d like to introduce is the type that is also referred to as the “Grandiose” (or “Traditional”) narcissist.

They are called as such because they carry the characteristics of someone who is very ambitious and someone whom we can consider as “big in the room”.

This type of narcissist is easier to spot because of the obvious signs that they are, indeed, narcissistic.

And besides, it is quite annoying to have people like them around as they are the types who would always demand for attention, validation, and act like they are always the star of the crowd.

They also believe that rules don’t apply to them as they have this belief that they are invincible and always above the rest.

They display an intoxicating amount of self-confidence.

Overt Narcissism and Social Media

I bet that you could think of someone who fits these descriptions perfectly while you’re reading through.

Well, it’s not a surprise.

This is because the Overt Narcissist type is the most common type of narcissists nowadays, especially due to the presence of Social Media.

Overt Narcissists consider Social Media as their playground where they get constant validation from other people.

But don’t get me wrong.

That is not always the case because, like I mentioned in my previous article, all of us have certain % of narcissism in our DNA but that doesn’t make us someone who has this personality disorder, automatically.

As normal human beings, all of us have this desire of getting liked and appreciated every now and then.

However, anything that is becoming quite excessive is what might cause the problem.

So, if you feel like your self-worth is determined by the number of engagements on your Social Media account, you better stop and start re-focusing yourself before things go out of hand.

If the Overt Narcissist is someone we consider as the type of narcissist that is easy to spot because some of the signs are quite obvious, the Covert Narcissist is the complete opposite as this is the quiet and less obvious type.

Covert Narcissists are also referred to as the “Vulnerable Narcissists” because they have very low self-esteem that’s why they tend to be more reserved and private.

Since the behavior is considered as “Covert”, it means that it is subtle and a bit less noticeable, unlike with the “Overt”.

In fact, there could be someone you know who is a Covert Narcissist but you don’t recognize it because the signs are shown in less obvious ways.

However, this doesn’t make them less of a narcissist.

Their narcissism is nothing different from the Overt ones, but they just have different ways of manifesting it.

To put it in a different context, it’s similar to when we are listening to a music.

Both of them are listening to the same music; the only difference is the volume.

According to the website www.goodtherapy.org, Covert Narcissism is also known as “Closet Narcissism” because people with this sub-type of narcissism do not outwardly demonstrate arrogance or entitlement.

Instead, they might put themselves down and would always seem anxious about what others think of them.

A Covert Narcissist is someone who craves admiration and importance deep inside, and lacks empathy towards others, but can act in a different way than an Overt Narcissist.

People with these traits would still feel unappreciated no matter how much appreciated they are as they need constant admiration.

They have contempt for those they consider inferior and believe that they should get special treatment at all times.

But instead of displaying outward grandiosity, they may privately fantasize about having their special qualities recognized.

They also even privately fantasize about getting revenge on people whom they believe have wronged them in some way, and they can do this while the other parties think that they have good relationship with them.

Here are the other signs of Covert Narcissism according to the same website:

Which Type of Narcissist Is The More Dangerous?

Now that we know the 2 Main Types of Narcissism, we are also now aware that narcissism doesn’t only apply to someone who has a grandiose type of personality.

Narcissism is not only limited to someone who is very loud, annoying, and over-confident because this only covers one type which is the Overt type.

We now know that even the shy, reserved, and quiet individuals can be narcissistic and they are the ones we call the Covert type.

But between the two of them, would you be able to guess which is the more dangerous type of a narcissist?

That’s what I’m going to cover on my next article so please watch out for that.