Here are some of the interesting facts about the author to better understand where she is coming from.

What Do You Need to Know About Christine? 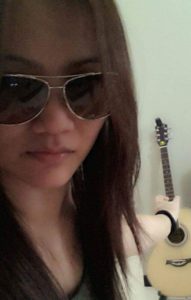 I never met my father because my parents separated when I was only 3 months old.

And I thank God everyday for giving me a wonderful mother and awesome grandparents who raised me.

I used to have a very nice penmanship and I would always get elected as the Class Secretary when I was in Elementary and High School (apart from the consistent “Best in Penmanship” awards that I received).

Unfortunately, I lost that gift after graduating from College when I learned how to do touch-typing.

My biggest musical influence was The Beatles who inspired me to hone my musical inclination.

I know how to play the guitar, piano/keyboard, and the drums (my favorite instrument!) although I never had any formal lessons on any of them.

I studied Communication Arts at St. Paul University Manila (formerly St. Paul College of Manila) where I took 5 major subjects such as:

To become an Architect was my first dream.

However, I was never gifted with good drawing skills plus the fact that I’m scared of numbers that’s why I did not pursue.

Instead, I took up Communication Arts because I love doing Productions.

I did not land a job related to my course after graduating, though, because I found a career in the Call Center/BPO Industry.

I thought it would be my forever until I got cheated on three times.

In the end, we did not separate because of his cheating but because I fell in love with someone else (my then-soon-to-be-husband).

My second serious relationship lasted for 9 years: 4 years as exclusively dating and 5 years of marriage.

We ended up having an annulment which I filed and financed on my own.

I stayed a virgin even after our separation in 2012.

I almost ended up broke during the time when I separated from my ex-husband because I lost almost everything I invested on.

That experience taught me how to become a courageous risk-taker when it comes to money matters.

When I turned 32 years old, I planned of having an Artificial Insemination just in case I haven’t gotten pregnant by the age of 35.

I was only dreaming of having my own baby, anyway, that’s why it won’t matter if I won’t end up with anyone.

My mom was in full support of this.

In 2013, I had my 3rd serious relationship partner, the future father of my daughter.

We started living together in 2016.

Then, we finally had our baby later that year.

I experienced being extremely happy and grateful when I finally reached my dream of becoming a mother. I was so happy that I got scared of the downfall (because I know that whatever comes up must come down).

We broke up in 2019 after I decided to end the relationship because it wasn’t working anymore. My decision was based on the fact that the life that we’re leading was no longer aligned to my core values.

We both did our best to make things work but I finally decided one day when I realized that there’s no more reason for me to stay together with someone whom I don’t see myself marrying in the future.

I didn’t want to waste more time so I decided to let go to allow ourselves to be happy chasing whatever and whoever we want to be.

Now, I’m starting to build another future. But not alone this time.

I’m excited for more adventures/misadventures to come our way!

Click here to know the Rationale behind the blog.