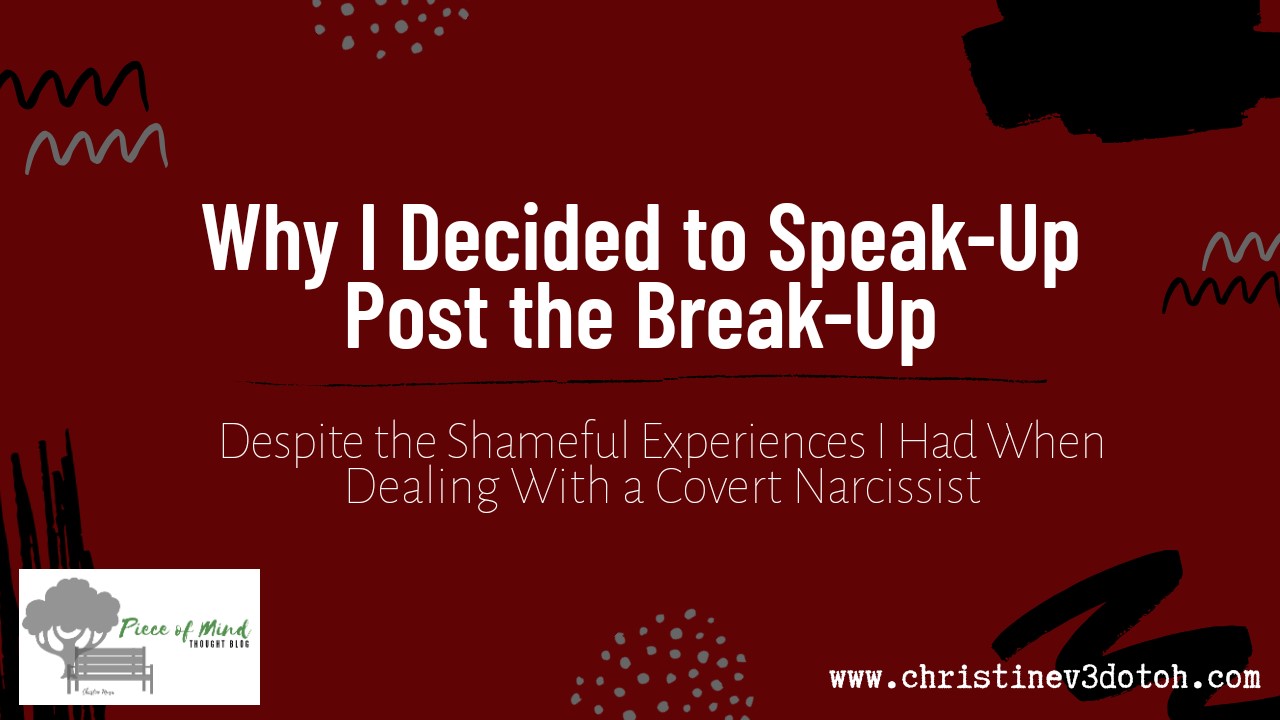 Perhaps one of the most difficult things to do after ending any relationship is letting those people who need to know what happened by speaking up about it once you’re ready and without being accused of doing a Smear Campaign against your ex.

Similar to what other people believe, I also think this is not really necessary, especially when nobody cares about you and your relationship with your ex.

However, if you have family and friends who have become part of your relationship, it would be best to maintain certain amount of transparency because they can help you get through the break-up by showing sincere support.

And also, in some unique cases when you’re dealing with an ex who has a personality disorder such as Narcissism, speaking up is important.

Because when you’re dealing with a Narcissist, the nature of the game is played very differently.

I’ll explain to you how.

NOTE: If you haven’t experienced dealing with someone who has Narcissistic Personality Disorder (NPD), you might find this article a little challenging to digest.

But in case you feel that way, don’t think that it’s because you have poor comprehension level.

Experiences in dealing with people who belong to this spectrum of personality disorder are not always given, obvious, and straightforward.

And you might need to have a direct experience or close contact with one in order to fully grasp.

In order to help you understand the situation a little easier, let me give you my personal reasons why I decided to speak-up after the break-up even though I knew that it would cause me so much shame.

“Smear Campaign” is defined in the dictionary as a plan to discredit a public figure by making false or dubious accusations.

Wikipedia defines it as an effort to damage or call into question someone’s reputation by propounding negative propaganda. Common targets are public officials, politicians, political candidates, activists, and ex-spouses.

But when we talk about the Smear Campaign which is done by the narcissists, it is described a little differently.

Narcissist Abuse Support describes it as a method of damage control that narcissists implement when they know they have been found out (meaning, somebody has discovered their real identity behind all the deceptions).

By creating a series of lies, exaggerations, half-truths, suspicions and false allegations about the victim’s behavior, these serve to undermine the victim’s credibility and sanity.

I’ve learned about this Smear Campaign before my narcissistic ex and I broke-up that’s why I wouldn’t be surprised if he’s done painting the town while smearing my name with people I don’t know.

I can guarantee that he’s done this because I discovered that he’s long been smearing my name even when we’re still together (I’ll share this story on the succeeding posts).

So one of the main reasons why I’m speaking up now is because I wanted to counter his actions and let all his sh*t boomerang towards his direction.

Difference Between Smear Campaign vs. Telling The Truth

Before I continue, let me address that question in your head which asks,

“Isn’t Smear Campaign the same with what you’re doing now as you’re telling stories which are mostly about your bad experiences with your ex?”

Smear Campaign is completely different from sharing stories of truth, backed-up with evidences.

To further help you understand the difference, please refer to table below I created showing the gaps:

The fact that I’m publishing this to the general public only proves that this is not a Smear Campaign because I’m allowing everyone to read a single version of the story.

The story is posted on this website which means that everything I’m stating here is documented, can be circulated to anyone, and could even be taken against me for all I care.

I don’t have issues with that because I’m 100% confident that everything I’m sharing with everyone here is not fabricated.

What I mentioned above is something that a Narcissist has 0% capacity of doing simply because Narcissists are liars.

Narcissists could have a million versions of a single story depending on the reality that they wish to project on to someone.

Normal people have only one version of truth and our stories remain consistent even if we would be asked to tell them backwards.

To be honest, the moment I learned a lot of things about Narcissism, I already expected that my ex would never do something in my favor.

Especially now that we’re no longer together and he’s already aware that we’re never getting back ever again.

I understand that I’ve caused him a massive Narcissistic Injury

And that’s the reason why he’s now doing Smear Campaigns in order to justify our break-up without him looking and feeling like a loser that he truly is.

Although deep inside, his ego had been crushed because, as the Narcissist, he should have been the one who discarded me and not the other way around.

So the fact that I escaped the abuse because I discovered who he really was behind the mask, now, he needs to do some damage control by making people believe that I was the bad, crazy, and obsessed ex-partner who was always at fault in our relationship.

And I’m just shaking my head thinking about the fake stories that he would need to create in order to turn things around.

But it’s just so funny how these Narcissists always end up sabotaging themselves simply because they couldn’t keep up with all the lies that they, themselves, fabricated.

But It’s Not Gonna Happen

So my Narcissistic ex would always do the same things over and over again; relationship after relationship; smearing his exes to all the people who still blindly believe him.

I know this for a fact because I was once that person who blindly believed all his stories, especially those stories about his ex relationship partners.

Let’s just say that when I first met him, I didn’t show any interest because my first impression of him was that he’s someone who won’t do anything good in life.

I blame myself for not sticking with that first impression.

The only time I started listening to him seriously was when he shared about his sad life stories.

He was telling me stories while relating to mine, because I was just recovering from a failed marriage during that time.

I wish I knew about the term “Mirroring” when we speak about Narcissism back then.

Because had I known about that, I would have identified his action as a “major” red flag as soon as he started getting my attention by sharing his own story of a failed marriage.

Who wouldn’t bother to start engaging in a conversation when you found out that you share a common ground with that person who’s been trying to grab your attention?

At that moment I thought it was “destiny”.

But knowing what I know now, I could simply say that it was just a Narcissist’s way of capturing his target victim.

So, yeah, my ex’s attempt to bring me down by doing a Smear Campaign over my name and reputation won’t happen.

Because I’m here to stand my ground.

By this time, I think you should have an idea that I’ve taken the job of a “whistle-blower” by publicly calling him out on his nasty and shady personality.

Well, my job doesn’t end there, because there’s this part of this whole revelation which aims to help the other victims to find themselves again.

And that would only become possible when they start knowing the truth behind every story.

Perhaps, when his exes start hearing the version of the story which came from my Narcissistic ex, they would confirm how nasty a liar this person really is behind closed doors.

And by knowing that, they should also realize that it’s never worth suffering mentally only because of this man.

I’m willing to share all the things that he’s said about other people, victims, and victims-alike that would surely help his exes to find closure.

I know very well that some of them might have spent the last 10 years doubting their worth as women and as human beings simply because of the way my Narcissistic ex discarded them in the past.

So I’m encouraging all his exes and/or previous victims to take down pointers so we could compare notes.

I could be sharing that missing piece in their story.

That story that would set them free.

COMING UP NEXT: My Narcissistic ex’s version(s) of the story as to why things didn’t work out with his past relationships. 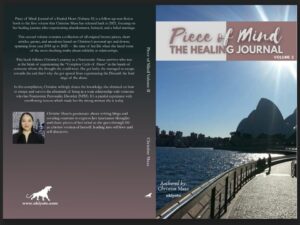