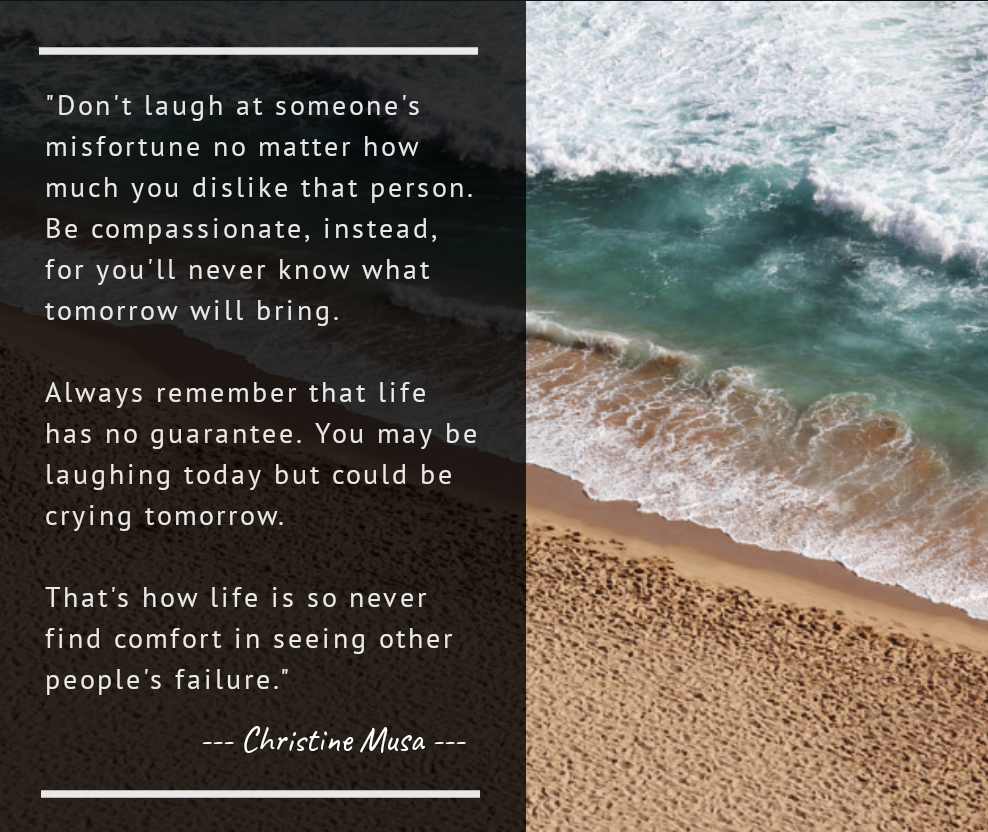 I remember having one of this fierce conversations with my ex-husband when he was telling me a story about one of his ex-girlfriends.

Apparently, he recently came to know that this ex-girlfriend of his ended up with a crew from a burger joint (Burger Machine).

Come to think of it, her parents wouldn’t allow me to date their daughter because I did’t have a car.

But look at me now, where I am now.

She ended up with someone who’s even worse than how I was back in the days.

I’ll never forget the look of victory in his eyes while he’s enthusiastically sharing that news with me.

He was very happy and proud of himself as he tried to look back at his humble beginnings.

He recalled those moments when he was still a nobody and how the parents of his ex-girlfriend looked down on him, doubting his capability to provide for their daughter if ever they would end up together.

He was only in High School.

That must have scarred him for life.

So I remember what he would always tell me back then,

I worked hard so that nobody could belittle me ever again.

True enough, he worked his way up wherever he was.

He became a Senior Telecom Manager of a known BPO company so he had his perks.

There’s nothing wrong with feeling proud about what you’ve worked hard for, especially if you managed to emerge from the bottom.

But the only thing I could not accept was the fact that he was celebrating his success at the expense of pinning down another soul.

These types of conversations make me feel uncomfortable.

So I called him out and said…

I don’t see anything wrong with his job.

It may not be the same and as ‘prestigious’ as yours but I don’t think it’s fair for us to look down on him simply because he’s not as fortunate as you are.

And if you are earning more than enough now, it doesn’t mean that it would remain like that forever.

We don’t know what the future holds for us.

Everything that we have right now could possibly disappear come tomorrow without any warning because there’s nothing permanent in life.

We have this kind of life because we’re working hard for it.

But what if one of us got sick, became permanently disabled, or, worse, died?

We could lose all these things in a snap before we could even realize.

He just kept quiet but I was pretty sure that he brushed my comments off.

Little did he realize that he just became one with his ex-girlfriend’s parents who looked down on people who try to make ends meet.

It was, indeed, a sad story.

There’s more to someone beyond what he/she does for a living.

No one has the right to belittle what I do for a living, especially if this what brings food on the table, as long as I’m not ruining someone else’s life.

And in return, I have no right to do the same unto others.

Our job is only a small percentage of who we are.

It doesn’t define us so no one should base his/her judgement from that.

No one should make fun of anyone who’s any facing misfortune in life because there’s nothing funny about someone suffering.

So, instead of feeding our ego by belittling other people just to think highly of ourselves, might as well just concentrate on what we do and give it our best everyday in order to maintain the type of life that we have.

You can also watch the Spoken Vlog version here.

Did you also have the same experience?

How does it make you feel when someone makes fun of what you do for a living?

How do you handle those situations?